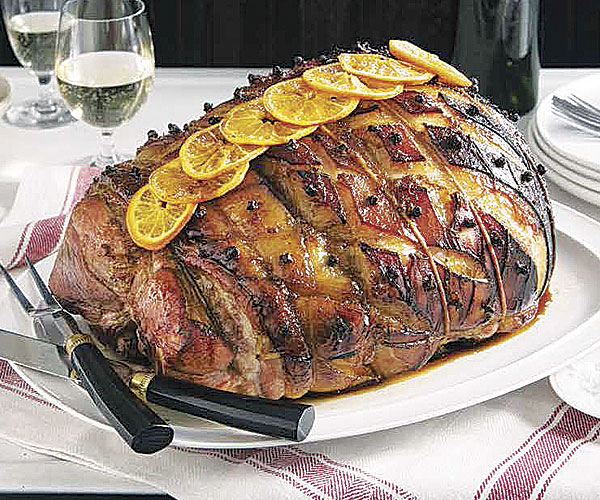 At Christmas, at my Grandparents house, we always had a fresh ham cooking. That ham was beautiful—it had a deep caramel–coloured, sweet, sticky glaze on it that was covered in orange or tangerine slices—and cloves stuck all around it.

In a small saucepan, stir the brown sugar, honey, cinnamon, cloves, salt, and tangerine zest. Stir in 1 cup of the tangerine juice and bring to a boil over medium heat. Reduce the heat and simmer until the glaze has thickened and reduced to about 1 cup, about 6 minutes. Remove from the heat and set the glaze aside to cool for 20 to 30 minutes to thicken slightly.

Position an oven rack in the lower third of the oven. Remove any racks above it and preheat the oven to 300°F.

Using a small paring knife, score the skin in straight lines on the diagonal and about 2 inches apart over the surface of the ham, making sure you cut just through the skin to the fat but not through the fat. Do the same thing in the other direction so you have diamond-shaped hash marks all over the ham.

Massage the salt all over the ham, including the cavity where the bone was removed. Tuck the ends of the ham under the ham so it is a uniform, football-like shape. Tie butcher’s rope across the length of the ham, making each knot about 1-1/2 inches apart. Stick the cloves into the ham.

Brush the glaze over the entire ham and inside the cavity; you will use about one- quarter of the glaze at this time. Put the ham skin side up on a roasting rack set inside a roasting pan. Roast the ham until a meat thermometer inserted into the thickest part of the ham registers 130° to 135°F, about 3-1/2 hours, basting the ham with the glaze about once every hour during the cooking time (you will have to warm the glaze over low heat before basting, as it will become too thick to brush on).

Take the ham out of the oven and increase the oven temperature to 400°F.

Remove and discard the butcher’s rope. Lay the tangerine rounds in a strip down the length of the ham. Put the ham back in the oven and roast until the skin is crisp and the tangerines are slightly caramelized, about 15 minutes. Let the ham rest for at least 20 minutes before carving it.

While the ham is resting, stir the remaining 1 cup tangerine juice into the remaining glaze and bring the glaze to a simmer over medium heat. Cook, stirring occasionally, until the glaze has thickened, 5 to 7 minutes.

Cut the ham into 1/4-inch slices and serve with the glaze on the side.